What is gravel riding, why should you do it and where do you start?

It used to be that if you wanted to ride off-road, you'd have to buy a mountain bike. Times have changed, and so have the bikes, and now gravel, adventure and allroad bikes are all the rage, the fastest growing segment in the cycling world.

These bikes feel the gap between road and mountain bikes, and in some ways are the best of both worlds. And with roads only getting rougher and more congested, and the lure of bikepacking events like Transcontinental and XPTD3, there's growing interest in getting off the beaten track.

What these bikes and this new style of events has done is broaden the range of riding available, and there is lots to recommend in swapping regular road-based rides for off-road adventures.

It's fun, for a start. Instead of trying to top a Strava leaderboard or beat your mates to the top of the hill, riding through the open countryside is immensely liberating of such performance-based shackles. It's also great for the mind and spirit, and no battling with angry motorists to deal with. Bike handling skills also benefit as you have to contend with a wide variety of terrain, and that benefits your road riding skills too.

Did we mention it's fun? It might come as no surprise that road riding can sometimes come across as a very serious pastime. The best thing about gravel and adventure riding is that there are no rules. It's all about having a good time, exploring and creating your own adventures, from continental epics to backyard loops.

- CHOOSING GRAVEL TYRES - WHAT WIDTH AND TREAD PATTERN IS RIGHT FOR YOU?

Gravel, adventure and allroad, what's in a name?

Why are we talking about Gravel, adventure and allroad? It's all gravel, isn't it? Sort of, but it's a bit more nuanced. These names all point to generally the same style of riding, but there are subtle differences. Gravel has its roots in long-distance racing events in the US predominantly on gravel roads.

Adventure has come to encompass a growing appetite for touring rides over multiple days, usually unsupported with sleeping bags and tents strapped to the bike, with events like the Tour Divide and Transcontinental Race the ultimate expression of this desire to race over a very long distance with no support.

Allroad is perhaps the most interesting name and one that best describes the sort of riding a lot of cyclists are tending towards and bikes like the Parlee Chebacco and Specialized Diverge are designed for. Quite simply, it's about riding a bike that is happy on the road and in the woods on dirt tracks. There's no limits or barrier to where these bikes can ride, they are happy on all sorts of terrain. They are also immensely versatile.

There are different types of terrain and those differences call for different bikes and tyres. Barry and I had an illuminating conversation with an American on the top of Mont Ventoux who was alarmed at the difference in gravel from what he was used to in the States to what he had just ridden up the slopes of the mountain.

Regardless of what you choose to call it, what we're seeing is a growing interest amongst our Bespoke clientele in "more than road ". It's not about abandoning road riding, it's about expanding your options.

Gravel: it's not all the same - here are the differences

At one end, you've got smooth, well-maintained dirt roads that have either very small gravel chunks or none at all, and are very road bike friendly. This is typical of many US gravel events but closer to home the Strada Bianchi is a good example of an event that combines long stretches of smooth dirt with road sections.

By and large, a road bike with 30-32mm will be sufficient, and example bikes could include the Trek Domane, Specialized Roubaix or Cannondale Synapse. You could even look at a cyclocross bike with 35mm tyres such as the Specialized Crux.

Get onto rougher gravel with bigger rocks and a much more varied terrain and you'll want to increase the size of the tyre to both increase comfort and traction but also to minimise the risk of flatting. You'll also be spending less time on the road with more of your time off-road, so any speed you might lose on the road compared to a road bike will be made up for with outright capability on the gravel.

Consider tyre widths from 35 to 42mm with bikes like the Moots Routt RSL, Trek Checkpoint, Specialized Diverge and Parlee Chebacco all designed to accommodate such wide tyres. A 40mm tyre is a really good sweet spot that balances weight, rolling resistance, comfort and aerodynamics well. Choose the right tread pattern and they're not all that slow on the road either if you do have to join up gravel sections with mandatory road stretches. 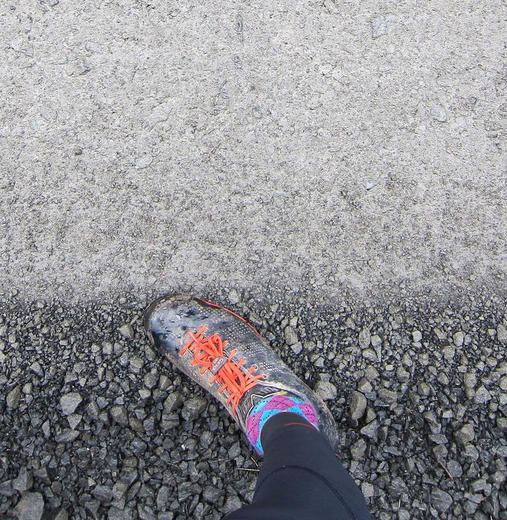 Leave the road behind and explore even more challenging and remote terrain with technical descents, bigger rocks and natural obstacles, and bigger tyres are a benefit. You can look to an Open UP or 3T Exploro with 45-50mm tyre clearance and the option to choose 650b with mountain bike tyres up to 2.25" in size.

These bikes are designed to know no limits. They can go virtually anywhere, over any terrain with almost mountain bike capabilities. Add a frame and seat pack and you can head off onto any size adventure, from a micro adventure over the weekend to a week-long trip across the Pyrenees. The only limit really is your imagination.

So, The bikes are a bit different?

Road bikes were never designed for riding off-road. Cyclocross bikes are lightly modified road bikes suitable for riding on grass and dirt, but what really sets the new breed of gravel and allroad bikes apart is their ability to accommodate really wide tyres. With bigger tyres, you open up a huge range of terrain possibilities, from smooth dirt and pea-sized gravel to boulders, roots and technical descents.

There are more subtle and some more obvious differences. Under the skin, the geometry sets these bikes apart. They are more relaxed than road bikes, and not as extreme as modern mountain bikes. Longer wheelbases and slacker angles create more stability when riding over loose terrain.

A significant influence from mountain bikes has shaped the design of many of the newest gravel bikes. We're seeing height adjustable dropper posts for providing more capability on technical descents, and even suspension such as the Future Shock on the Specialized Diverge to Fox's 35mm suspension fork and the radical looking Lauf Grit fork.

The 650b is a common wheelsize on mountain bikes and is proving popular with gravel bikes, providing a bigger tyre volume for roughly the same overall wheelsize as a smaller tyre on a 700c rim. Some of the more extreme gravel bikes will take a 2.1 or 2.25" mountain bike tyre, providing pretty much unlimited off-road terrain.

The Right Bike for the Job

The Trek Boone and Specialized Crux are raced at UCI elite cross level. Designed specifically for racing with a high bottom bracket and clearance for up to 35mm tyres, commonly with no concessions to versatility, so no fitting mudguards. Good choice for slightly rougher gravel but limited to narrow 'cross tyres.

The Parlee Chebacco, Moots Routt, Mosaic GT-1, Specialized Diverge and Trek Checkpoint offer much wider tyre clearance for taking on much rougher gravel roads and also technical trails, woodland singletrack and outback adventures. Geometry is designed for on and off-road use, frames have mudguard mounts and some have specific features like dropper posts and integrated suspension (such as the FutureShock on the Diverge).

Bikes like the Open UP/UPPER and 3T Exploro push road bikes really close to mountain bikes in terms of off-road capability with big tyres for tackling the most challenging terrain, when you've left the road miles behind. 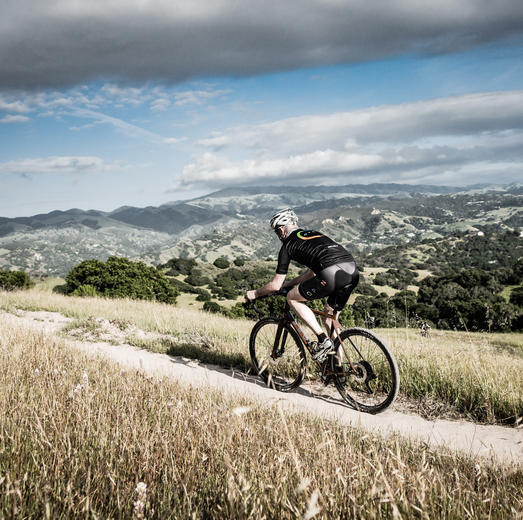 Gravel events and riding in the UK and around the world

The best thing about these bikes is you only need your imagination and a willingness to follow your nose to find suitable off-road trails. Here in the UK, you'll be amazed at how easy it is to get off the road onto the huge network of bridleways and byways, even the bigger cities are well catered for. Get hold of an OS map and you'll soon uncover a wealth of suitable places to ride these bikes.

If you want to test yourself and your new bike in an organised event, well there's a growing number of events all the world that are catering specifically for bikes like these. Probably the original is the Dirty Kanza, a 200-mile event held entirely on gravel roads and it's been going for a decade and has built itself up to be the premiere gravel event by which all others are judged.

But it's just the tip of a huge gravel iceberg. Oregon Coast Gravel Epic, Gorge Roubaix Race and Grinder, Rock Cobbler Ride, Lost and Found Sierra Nevada Gravel Grinder, Cedar City Fire Road, Perry-Roubaix, Ten Thousand, Crusher in the Tushar, Tour Iowa and many more we don't have space to list here. One we've got our eye on is La Resistance in France, with two distances to choose from.

Closer to home, there's the Dirty Reiver which mimics the Dirty Kanza with 200km solely on gravel roads around the wilderness of Kielder Forest, about as remote an area you can find on this small island. Also consider the Yorkshire True Grit, Ridgeway 100, White Horse Ridge, the Gold Rush, Gran Fonduro and the Dorset Gravel Dash.

There's also the GritFest and Grinduro which bring the mountain bike enduro format of timed stages to a gravel event.

If one-day riding isn't too easy for you and you prefer an epic multi-day challenge, consider the legendary Tour Divide, a self-supported bikepacking epic. There's also the Tour Aotearoa and the Yak Attack and many more.

And of course, there's planning your own adventure. Plot a route from A to B, or get a train or flight to somewhere and then ride home, picking the most interesting scenic roads.

More Than Road, Here to Stay

What started as a US-based niche has rapidly become a global phenomenon, and for good reason. There's a versatility to gravel/adventure bikes that makes them very attractive, but most of all it's the sheer fun factor that makes them stand out.

Gravel is even being embraced by the Grand Tours. Nothing new there, of course, the early editions of the Tour de France covered many unpaved roads, they had no option.

But we're now seeing a return to these surfaces by choice, as exemplified by Chris Froome's epic breakaway on the Colle delle Finestre in this year's Giro, and the 2019 Tour de France's inclusion of a steep gravel dirt-road summit finish on La Planche des Belles Filles.

Naturally this means a trickle-down effect, with the 2018 Étape following suit, using the Annecy-Le Grand Bornand stage with its stunning gravel plateau. So we're certain to see more sportives and public events incorporating gravel sections over the coming seasons.

If you want to know more about the growing world of gravel/adventure we'll be adding to our library of blog articles over the coming months. You can find the whole collection here: https://www.bespokecycling.com/blog/adventure

And if you have any questions, just get in touch - we're here to help whether with demystifying equipment choice, recommending options, or of course fitting and building your perfect gravel bike.

Most of all - get out there and have fun!

Aero matters, even when you're off the beaten track. 3T launched the first aero gravel/adventure bike with the Exploro, now with 20% off

Barry gets a new bike, falls in love...

An adventure and gravel bike takes elements of a cyclocross, endurance and mountain bike and fuses them into a package that is ideally suited for riding over just about any...