This will only be a brief review; I have owned two S-Works Tarmac SL6s (first a rim brake model, and then last year the Disc one I rode in Haute Route Stelvio and in the Pyrenees).

I decided to buy a new one; my last two were size 58 and I wanted to try a 56. But the main reason was that this was a good excuse to test the new SRAM Red AXS groupset!

Up until now I've had limited mileage on AXS: only a few demo rides including the Paris-Roubaix sportive. 99% of my riding is on Di2. So I wanted to get a proper comparison between the two.

So far I really like AXS; I think it looks fantastic; the crank is a work of industrial art.

I also love the hood shape; they are really big and chunky; lots to grab onto when you want to get into an aggressive position with a flat back and your forearms parallel to the ground. In that sense they are much better than the Di2 ones, which feel skinny in comparison.

I also love the ease of setting it up via the phone app; the Di2 way of plugging a cable into a computer is much more clunky and involved. The neatness (and tiny aero benefit - but mainly looks) of the wireless shifting is also a welcome benefit (and less of a pain to install/work on than a nest of Shimano cables).

The star of the show for me on this bike is the Quarq AXS power meter integrated into the cranks. Shimano have had their well documented issues with making a reliable power meter for the Dura-Ace crank. Whereas Quarq have a stellar reputation; and having this built-in and ready to go is a real competitive advantage in my eyes. In my testing it performed flawlessly, and feedback from customers indicates that this is a common experience.

Athough AXS shifting is much quicker than previous generations of eTap; I still prefer the 'bolt action' feel of Di2. It just feels a more engineered and precise shift. Both are precise and fast, Di2 just has a crisper feel, to my mind.

The fact that it's 12 speed is, I must confess, lost on me so far; I've really not noticed any difference vs 11 speed. It's early days though and that might change...

So - Di2 or AXS - which is best? I am honestly not sure; I can see compelling arguments for both. Put it this way; you will likely be delighted with either.

When we test bikes we test them properly - they're paid for, ridden extensively in real-world conditions - and then cleaned, serviced and made available for purchase (well, there's only so much room, and always something new to test!).

Read about our testing ethos here, and if you're interested in this particular ex-test Tarmac, at a one-off discounted price - get in touch 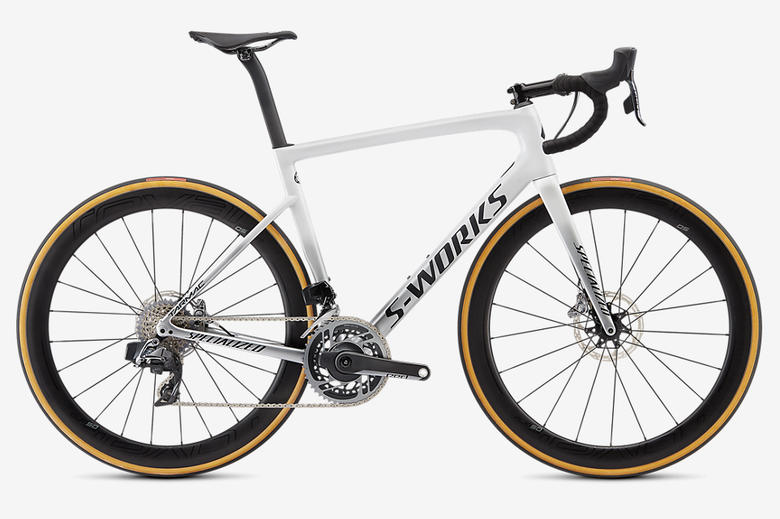 Getting back on the Tarmac after almost a year of testing other bikes reminded me just how good it is; it's a real modern classic - the benchmark modern stage race bike (in my eyes).

It is light, stiff, aero and super comfortable. I could ride it all day, and I often do!

The only place it's slightly showing its age compared to new bikes like the Scott Addict and the Cannondale SuperSix is the exposed brake cable; I assume the next generation Tarmac (whenever it comes out) will address that. But that's genuinely the only thing I can see Specialized changing; it will be a towering achievement if they can find any substantial improvements to the current frameset's breadth of qualities.

This build is a couple of hundred grams heavier than the one I had before; 12 speed AXS is slightly heavier than Di2 (especially with Specialized's super light crankset saving a few extra grams on the Shimano-equipped model). And that lustrous pearl white paint will not be light either. It's worth the slight penalty in my eyes though; it looks stunning in the flesh; I am a sucker for white bikes!

Sorry for a boring review; it's hard to find different ways of saying "fabulous"! This really is an impressive machine.

Specialized have announced their updated Tarmac Disc range, bringing many of the innovations from the S-Works range to a more widely accessible price point