Specialized have launched their latest generation Tarmac, the eagerly awaited SL7. One of the worst kept 'secrets' in cycling this year, it's been a question of when, not if, the new bike would arrive, with speculation, spy shots and finally even officially sanctioned Virtual Reality models circulating. So, was it worth the wait? Let's take a look... 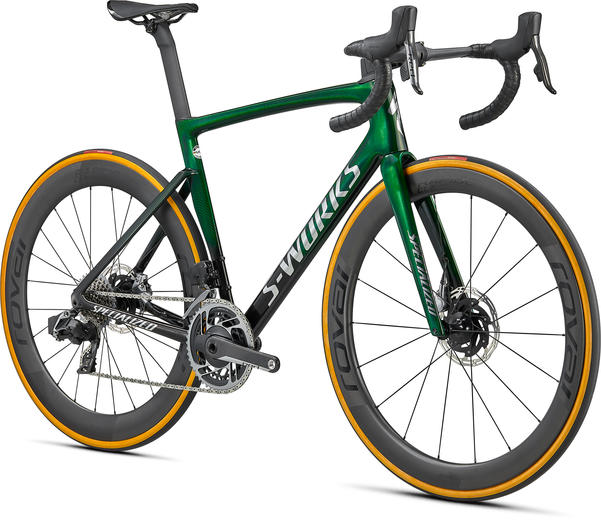 above: the climbing prowess of Julian Alaphilippe, and the flat out speed of Peter Sagan - two very different types of rider, both served by the new SL7.

Convergence. That's one of the emerging themes of 2020. We've already seen gravel bikes becoming more aero, and now pure road bikes are starting to span more categories than ever before.

It used to be that if you wanted maximum aero performance you were likely to end up with a heavier, harsher-riding bike - thankfully that's no longer the case. And as race profiles have become more varied the Pros have been asking for bikes that can cope with a wider range of terrain. Needing to swap between a "climbing bike" an "aero bike" and an "endurance bike" is a hassle for the Pro rider, and an unrealistic choice for many of the rest of us.

Advances in carbon fibre materials and layup, and the newly possible tube shapes they enable, allow bikes to be stiffer and lighter without any loss of aerodynamic performance. Trek's recent Émonda demonstrated this, with their climbing model adding a welcome aero boost.

Specialized aren't going to be left behind, and the SL7 matches the ultralight Trek with a frame weight (painted) for the S-Works Tarmac of just 800g, via their latest FACT 12r carbon. That's proper lightweight climber territory, on a bike that's more aero than the previous generation Venge. It's that fast.

With their own wind tunnel and a wealth of expertise Specialized have unsurprisingly achieved some real aero magic here - to the extent that the new Tarmac SL7 effectively replaces the Venge in their lineup.

That's quite something - for a brand to step back and say 'actually one of our hugely popular bikes is no longer needed', particularly when they are so heavily involved in the Pro racing scene, shows that this is no marketing hype - the new Tarmac is exceptionally capable.

As an example of what's possible - the S-Works Di2 complete bike weighs in at 6.7kg out of the box (in Carbon Colour Run/Silver/Green) and that's without any special weight weenie touches. With the right mix of components a custom build can be made to UCI-bothering standards.

The Pro and Expert models use FACT 10r carbon for a frame weight of 920g.

Aero is of course where some of the biggest advances can be found, and the SL7 is no exception. The sleek frameset may be light, but Specialized say it's also a whopping 45 seconds faster than the SL6 over a 40km course, thanks to tube shapes taken from their Free Foil library and extensively tested in a multitude of combinations.

That ultimate speed build includes the likes of the Aerofly II bars (always a favourite), the new Tarmac stem with integrated cable routing, and the superlight Roval Rapide CLX wheelset. But they've not just designed this as a fixed package, there's plenty of option to mix and match components, whether that's a conventional round handlebar, your own choice of stem, or whether you opt for mechanical or electronic shifting.

There's a sleek new Tarmac stem, too, with neatly integrated cabling; available in -6 and -12 degrees, in a wide range of lengths from 70mm to 130mm (in 10mm increments).

It pairs particularly well with the much loved Aerofly bars, but will happily work with any standard 31.8mm bar.

The SL7 seatpost is available as standard with a 20mm offset, or as an inline version, and if you're running Di2 there's a dedicated space for the junction box within the seatpost.

So there's all the integration you'd expect on a modern road bike, and plenty of scope for us to find your perfect fit. 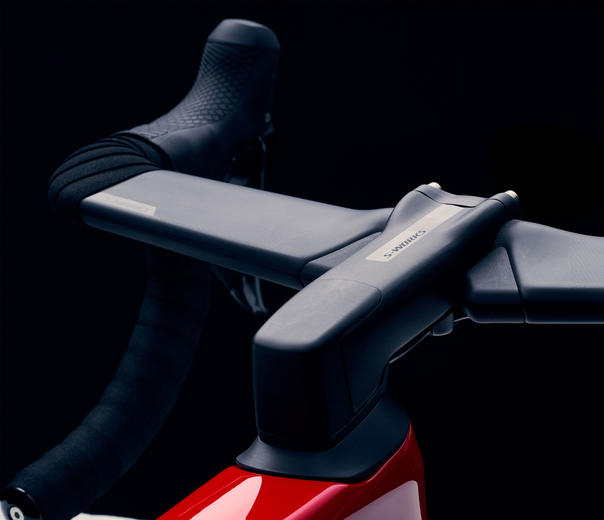 The Tarmac range is disc brake only and, thankfully, runs with Specialized's design philosophy of creating bikes that fit regardless of gender - we're all proportioned differently. So there's no distinct men's and women's range here, just plenty of adjustability and a huge amount of research into fit (aided by sister company Retül). You are free to choose the model that suits you best (and we will of course ensure that it fits perfectly!).

The Tarmac SL6 lives on, too - providing a more affordable entry point to the range, with the same geometry, in the Sport and Comp level bikes.

TARMAC EXPERT - ULTEGRA DI2 - £4750
One of two Expert options at the same price - this one gives you electronic shifting, with an alloy DT R470 wheelset.

TARMAC EXPERT - CARBON WHEELS - £4750
If electronic shifting isn't of interest, this Expert features mechanical Ultegra, but that frees up some budget for a carbon wheelset - the very respectable Roval C 38 Disc.

TARMAC COMP SL6 - £3250
The SL6 lives on - this is the previous generation Tarmac frameset, unchanged except for paint scheme, in FACT 9r carbon. The Comp features mechanical Ultegra and a DT R470 alloy wheelset.

TARMAC SPORT SL6 - £2500
An older design, but still a great performer, and now more affordable. The entry point to Tarmac ownership is equipped with a Shimano 105 groupset and, again, DT's trusty R470 wheels.

The new Tarmac SL7 is available now from Bespoke. As with most new bike launches, and particularly in the current global situation, supplies will be a little constrained to start with. But as a leading S-Works specialist we have early access to stock - see the latest available bikes and framesets in our Online Shop or contact us to discuss your own SL7, perfectly fitted.

New lightweight wheelsets from Roval, with the aero-optimised Rapide CLX and ultralight Alpinist CLX bringing a compelling feature set to a competitive market.

Specialized introduce a new version of their brilliant S-Works 7 Road shoes - the Vent are, as the name implies, extra well ventilated for comfort in hotter conditions.

Barry takes a hands on (and bottom on) look at the recently launched S-Works Power with Mirror - a 3D printed saddle aimed at giving the ultimate in comfort and support.