The all new Specialized Roubaix has made quite an arrival, with an outstanding performance at this year's Paris-Roubaix (including race winner Philippe Gilbert).

We've already taken an overview of the new bike here on the blog, but that's not all. Barry spent a couple of days before the main event, testing the new Specialized on the toughest routes the region has to offer, including the epic Paris-Roubaix Challenge.

Read on for his account of this awesome sportive and the bike he rode to tackle it:

On Saturday I did the Paris-Roubaix Sportive one day before the Pros headed out over the same course.

The chap I was riding with decided that the phrase "the grass is always greener..." needed to be amended to "the pavé is always smoother on the other side" and we would constantly zig-zag trying to find the least broken section. Hilariously, sections of rock and dirt which you would consciously avoid on your usual Sunday club run were now sections you actively hunted out for 2-3 metres of blessed "relief".

The downside of doing a point-to-point route is that if you have a head wind (as we did) you get it for the whole day; 174km of a stiff, cold, northerly wind. I was grateful for any aero benefit that the Roubaix could give me in these conditions.

After 2 hours of riding I realised it was basically going to be a 6 hour ride with 29 intervals that lasted 2-5 minutes full blast - and then the road sections linked in were basically block head winds. So - nowhere to hide!

When I'm on a "good day" I have this stage where I feel tired, and half-way through, if I have been going hard, I start doubting I will last. As the Kms tick down in some ways I can't wait for it to finish, but at the same time I don't want it to end. You are addicted to the endorphins!

A slight snafu at the start meant that our coach was an hour late arriving, and then got held up in traffic and road blocks.

As a result we started after the official cut off of 9am; in fact we weren't on the road till 9.20. Literally the last starters of the race... and because of that we had no groups to work with. Just myself and a chap I had met; but we fortunately worked really well together and ended up doing the entire ride together.

The logistics of a point to point race are very difficult; you need to get a coach super early to the start. The 145km route is much easier to access; its a circular event and thus a mere 30 min coach ride from the hotel vs our 2 hour journey to the start. But because I was a guest of Specialized and they were organising it all I took advantage of the opportunity for the private shuttle.

It was all super pro; We may have arrived at the start late, but on arrival our bikes were all lined up; route pavé sections stickered onto the top tube, two full water bottles, race numbers already on... A properly pro setup. Their mechanic at the start handed us loads of energy gels and a pump and one inner tube each and off we went...

My number one fear was getting a puncture. If you get a puncture on a pavé section you basically need to get off the road and into a field to fix it; and your fingers are so numb that you will struggle.

Fortunately all our bikes performed flawlessly; though I did suffer from ghost shifting on the cobbles; basically your chain jumps up and down the cassette because it's being bounced around so aggressively. There is a reason why many pros ride mechanical shifting for this event only.

This was my first time riding the new SRAM Force AXS groupset. It was really nice, and honestly for a bike where weight is not an ultimate priority I struggle to see how RED is much better. The hood shape in particular felt great; you can really grab hold of it when hammering on the flat sections.

I tested the Roubaix Pro which retails for £6400, has carbon wheels and Force AXS.

Some of my European retail counterparts got to test the Dura-Ace Di2 version; others had the Ultegra Di2 - and a few lucky sods got to test the "team version" which is a much more aggressive geometry and will be offered later in the year, in limited numbers, as a frameset only (spoiler alert: I liked the bike so much I have pre-ordered one of these team frames already).

FutureShock 2.0 is cool. The ability to dial it in on the fly is great and you feel super-pro. As you enter a pavé section you open it out, and then when the hell is over and you enter a road section you close it to firm the suspension right up. At this stage there is no bob at all; it is the best of both worlds.

In a way testing the bike in Roubaix is tough; the pavé is so hellish that nothing is going to feel perfect. But when you hit a road section (i.e. where you will spend 99% of your time on the bike) it's sublime. The new seatpost is very clever and you can absolutely feel it flexing and absorbing bumps (although not to the extent where it affects your cadence). And I can see why those who go up to 28mm tyres never go back. 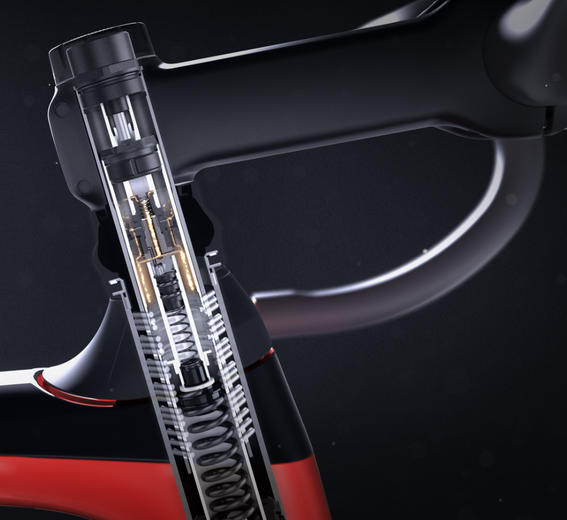 And the bike is fast... Specialized claim it's more aero than a Tarmac and lighter than a Venge.

Pretty astounding claims and I have no way of proving them; but subjectively it feels very fast and on the road sections we were really motoring along.

Looking at our data afterwards; for the last 20km, as the energy gels and the caffeine really kicked in we averaged 38km/h and 310w and we were overtaking huge peletons and riding straight through them. The bike felt absolutely amazing.

On the Friday we'd already done 65km around some of the Tour of Flanders Bergs. The bike definitely felt a bit more sluggish than my personal Tarmac; that could be the wider tyres, slightly heavier weight, or the fact that the geometry is quite a bit more upright.

But a more likely culprit is that we'd all been out drinking on the Thursday night, and 9% Belgian beers don't agree with me... We all agreed on a scale of sub-optimal hangover recoveries Flanders cobbles were right up there!

The Roubaix can take up to a 33mm tyre safely; which means it can probably do north of 35-37mm at a pinch - so its a quasi-gravel bike as well. Certainly the integrated suspension puts it right at the most versatile end of the 'endurance' spectrum.

Is the Roubaix a bike for you?

I was thinking about this a lot. As mentioned above, Specialized say it's lighter than the Venge, and more aero than a Tarmac.

So I can't decide if that means you only need one bike, as it's so versatile. Or are these bikes so refined and specific it means you should get all three?

But there is huge overlap; after all, you can get a Venge and put on shallower wheels and it's a perfectly decent climbing bike. Or get a Tarmac and put 64mm deep wheels on, with aero bars and its very close to a Venge (just more versatile).

Similarly the Roubaix can pretty much do it all. Ultimately a lot will come down to that geometry - does it suit you and the majority of your riding (that's where we come in of course; whichever bike you're interested in, or if your options are still wide open, we start with a Bike Fit to establish what will work best for your goals).

So, it's not a clear cut choice, but if you want an exceptionally versatile bike, the latest Roubaix definitely lives up to Specialized's "Smoother is Faster" tagline. My initial impressions are that it delivers everything they promise, with no obvious achilles heel, and we're sure to be seeing a lot of these passing through the shop over the coming months and years.

The radically redesigned new Specialized Roubaix is here, and it's impressive. Still very much an endurance road bike but now more aero and higher performance than ever.